This book was a gift to my daughter when she graduated in Biology from Bath University.
It is made from an old encyclopaedia which was about to be thrown out in a house clearance.
Click on any picture to start the slide show.

I used an old pictorial encyclopedia and created pewter plaques for the front. The clasp is made from an old stethoscope since her next step is medical school.

For the inside cover I photocopied and inner cover of a bible and cut a flap.

Under the flap, a self-portrait of my daughter is revealed.

Opposite the inside cover, the first page is themed Ancestors and shows photos of relatives on tissue aged with pastels. The Mother (me) has a body made of a scan of a foetus on top of a flap which opens to reveal a baby in the womb. The top corner is cut to reveal a picture of Rosie. 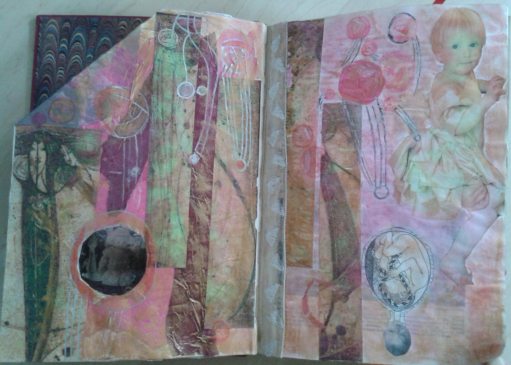 This page is inspired by the Aesthetic period of art, 1880 to 1900 and references “The White Rose and the Red Rose” by Margaret Macdonald Mackintosh.

This page is on the theme of hand prints. The teenage hand print of my daughter forms a pocket. In the pocket is her baby hand print and some of her art work.

This page has a fold out with instructions to “Unfold” partially obscured by linen scrim (used for cleaning windows). 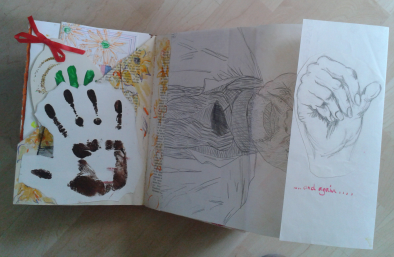 The page unfolds to reveal a sketch of a hand by my daughter and instructions to unfold again.

And inside a copy of Van Gogh’s self-portrait.

On the left is a poem about babies written and illustrated by my daughter. On the right is the first picture of a face my daughter drew and photos of her as a baby that pull out of pockets to reveal more photos underneath.

On the left is the page on a theme of losing that first tooth. I have used butterflies cut from old book pages, tissue paper, writing about the tooth fairy and a net made from a drink stirrer and scrim which actually holds the first lost tooth which I kept.

On the left is a fold out gallery of family portraits by my daughter. this one is me. On the right is a card she made on a background of a colour picture of the solar system cut into strips, mixed up and stuck on with gaps between which I have applied oil pastels and inks to create a new universe. 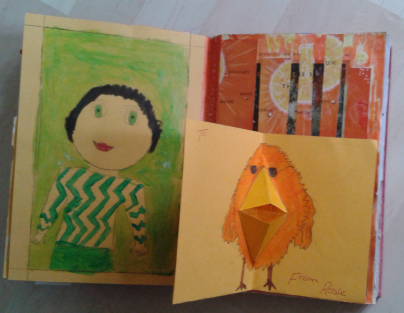 The card opens in to a pop-up Easter chick. Wasn’t she clever. 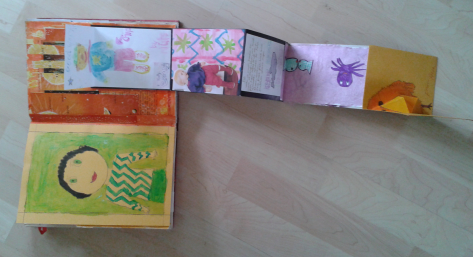 behind the Easter card is a pull out with more art work by my daughter. I made the pull out from a concertina advertising leaflet from Volvo.

Now we are at junior school and a purple/pink theme. The pictures on the left are of my daughter and her brother entertaining us with dressing up and dancing. On the right is a diagonal pocket decorated with tissue paper, ink and silver acrylic paint. The pocket holds more of my daughter’s art work. 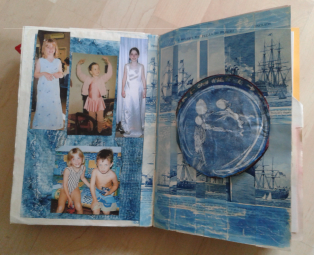 This is the blue page. The background on the left is a collagraph print of mine on Japanese paper that did not come out too well so I kept it for a background. On the right the background is a picture of old ships, cut into strips and stuck on the page with gaps between where I have used oil pastels and ink to make the sea. The circular pull out is a monoprint of mine of a mother and child.

Here is the pullout. I made it from a care information leaflet that came with a pair of walking boots. 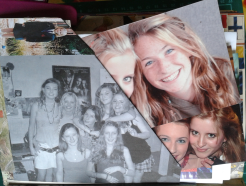 Her school has a naval history so I have used semaphore flags and Nelson’s motto, “England expects that every man shall do his duty” along with a passage from a book on Grenville which was the house my daughter belonged to. Small reproductions of her art work also decorate the pages.

In the centre of this page is a photo of my daughter looking at herself in the mirror before her prom. By folding it in half it makes a good pop-out. Behind on the right hand side is a picture of Ophelia by my daughter, copied from a pre-Raphaelite painting by Sir John Everett Millais. I have stuck this onto tracing paper. Behind it you can see a decoupage background of sea creatures.

Here is Ophelia “floating” above the water. 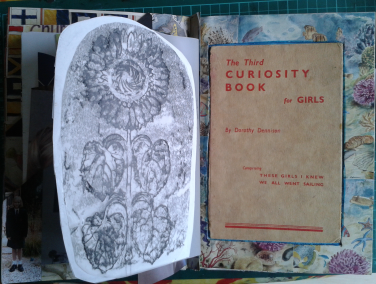 Lifting up Ophelia you find a monoprint of a sunflower. On the right, a book cover is inset into a niche.

When I found this section of an old book describing the “machinery” of the body, it was just right for a fold out for a biology student. So I taped each “organ” together is as logical a way as a the pages allowed and voila, we have the human body in steampunk! 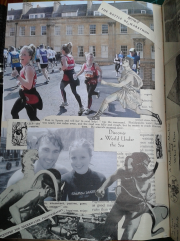 And now to university where my daughter took up marathon running through the historic city of Bath. you can see she is pursued by the Greek messenger Pheidippides running to Athens with news of the victory which became the inspiration for this athletic event, introduced at the 1896 Athens Olympics, and originally run between Marathon and Athens. Below she is pictured learning to deep sea dive surrounded by vintage diving pictures.

And because parents don’t really know what goes on at university, this page contains fragments of news and friends from university.

And so to the finale. A niche cut into the book and decorated with decoupage, vintage first aid pictures referencing her next step to train as a medic. In the niche I am going to put a limited edition sterling coin released to commemorate the discovery of DNA in 1953. thsi was my daughter’s specialisation at university and she spent a summer at the Sanger Institute in Cambridge working on DNA projects.